A bet between two poker players has unexpectedly come to an end. Rich Alati was to have spent 30 days in complete darkness and he could have won $100,000 if he did. Rory Young (featured image above) decided to withdraw from the bet.

Some time ago we informed you about this unusual bet, but back then not so many details were disclosed (here is the original post).

As it turns out yesterday players agreed to finish the bet earlier. Alati was able to stay for 20 days in the dark and it seemed like he was going to win $100,000. Instead Alati received $62,400 by letting Young withdraw from the bet. The news was made public by The Action Network. 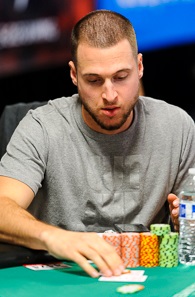 Rory Young explains that the negotiations started when he visited Alati with a supply of fresh food. Young could see that Alati (on the right) was doing quite well both physically and mentally so he first offered $25,000 for ending it all. This offer was quickly rejected and poker players continued negotiations. Finally they agreed on the sum mentioned above and Young was happy as he seemingly saved lots of dollars in a bet that was not going as he assumed.

“When I delivered him food this last time he was stronger than ever before. I underestimated his mindset. I am not disappointed in the bet's outcome. I had good odds, but he surprised me with his approach” – said Young talking to The Action Network. Poker player also added that Alati knew very well how long he was locked in the bathroom which certainly gave him a lot of motivation. Alati was paying a lot of attention to sounds and he was able to count how many days have passed.

The Action Network reached the contract that Young and Alati signed for the prop bet. 11-page long document included information on the following aspects of the challenge:

– Young was not in any way to be responsible for the health of his friend,

– there was a special 3-person committee that was to settle any arguments between poker players,

– the fridge in the bathroom had its light removed,

– Alati could order any food, but Young had the right to refuse any product,

– the person who loses the bet also has to pay $7,000 for the bet preparation.

SEE ALSO: An interesting survey at Twitter – should we decrease the big blind ante?