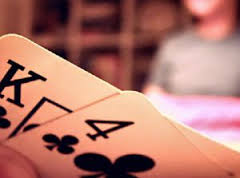 In the first part of the article we mentioned that winning requires reading our opponents and skills to play our owna hands correctly when we are certain of having the best hand. The skills come into play when more and more community cards appear on the table. 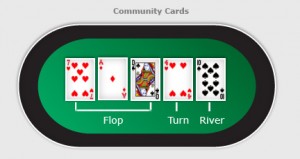 The first player to make decision preflop is on early position and he sits next to the Big Blind. After the flop – that is the three community cards Small Blind is the first to act (if he folded the first to act is the next player behind SB). The same rules apply for the next rounds. When players see the ‘Flop' (3 cards), they bet and it goes the same way like preflop – someone bets, other raises and some fold. In the one he who bets last wins the pot if others fold. If he is called we take a look at the next card – called ‘Turn' (1 card). Players in the game can also see the fourth card by checking on the flop (all of them). It means none of them decided to bet. This is one of the things which differ preflop and postflop game. Before the community cards are dealt no one can check, apart from the player on the big blind, provided at least one person called and no one raised. If all players decide to fold preflop Big Blind takes down the pot (small and big blind). As for the next rounds everything plays virtually the same as on the flop. The fourth card called “Turn” means that players must have another round of betting. Of course they can all check and “peacefully” get to the final stage of a poker hand. The fifth card on the table is called ‘River'. For the last time players bet and if one bets and no one calls him he wins everything what is in the pot. If all check or player is called we have a ‘Showdown' – players reveal their cards and compare cards to see who has won the hand.

Of course it's rather useful to know what hands there are in poker and which is higher. How does it look? Can we win a hand with cards weaker than the ones our opponent has? Stay tuned for the next episode!