We've got another poker scandal coming up. The main spots in this one will apparently be taken by a streamer who tries to get a Platinum Pass, Joey Ingram and a great event that both of them may be participating in.

PokerStars is slowly getting to the end of the Platinum Pass special promotion time in which players could win tickets to Player's No Limit Holdem Championship. All winners receive a $25,000 entry, as well as extra money for travelling and expenses in the Bahamas.

Some of the packages were given away to the community. Also interested in the Platinum Pass was Arlie Shaban – streamer, who belongs to Run it Up, managed by Jason Somerville. PokerStars prepared twelve tasks for him with a package waiting if he completes all of them. Shaban was for instance playing against Lex Veldhuis, competed at online tables and tried his luck at a HORSE event.

The real problem turned out to be the last task. Shaban has to convince another player to go with him to the Bahamas to play the tournament… Yes you have guessed correctly – his partner is to be Joey Ingram! There is an extra Platinum Pass ready if the popular streamer decided to accept his friend's invitation.

The news about Shaban's last task started an avalanche of both positive and negative comments addressed at PokerStars. The room went all-in here, no doubt. Ingram has spoken many times saying that the changes over at their room are bad – he criticized rake increases and practically all modifications. He commented on PS many times in his podcasts as well. On Twitter he asked questions bluntly and openyly said alterations at PokerStars were not to his liking. He even said he did not like the Player's No Limit Holdem Championship itself. Controversies in the community

Some players liked the idea proposed by PokerStars. Others commented that seemingly nice request for Shaban is an attempt to buy over Ingram's favor.

– Assuming there are no hidden conditions and you will not have to do anything you don't want to I would play it. See no reason not to – wrote Phil Galfond. 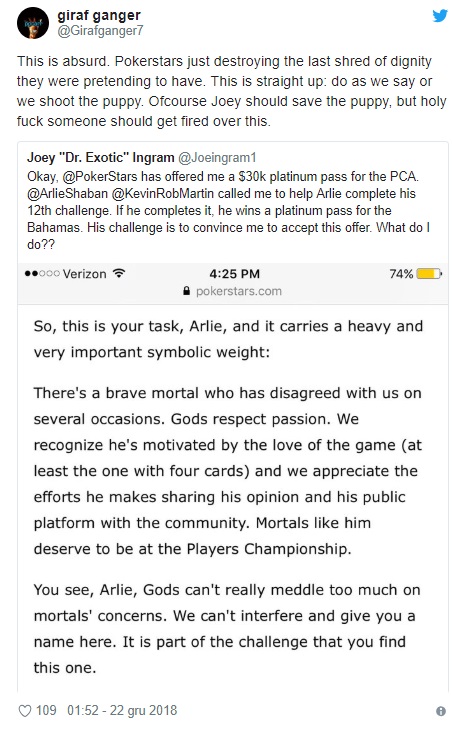 Do you agree with it? Should Joey take the offer PokerStars and go with Shaban, thus guaranteeing a package for him and the streamer? Or maybe he should reject the offer and show that he truly believes in what he says so often?